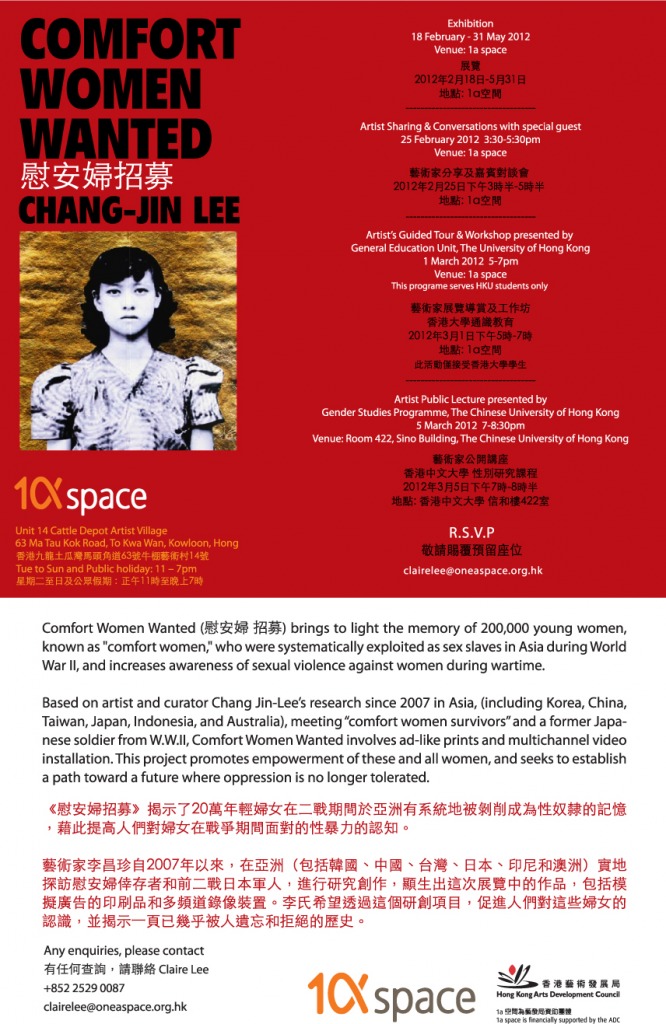 COMFORT WOMEN WANTED brings to light the memory of 200,000 young women, known as "comfort women," who were systematically exploited as sex slaves in Asia during World War II, and increases awareness of sexual violence against women during wartime.

The gathering of women to serve the Imperial Japanese Army was organized on an industrial scale not seen before in modern history. This project promotes awareness of these women, some of whom are still alive today, and brings to light a history which has been largely forgotten and denied.

The title, COMFORT WOMEN WANTED, is a reference to the actual text of advertisements which appeared in Asia newspapers during the war. When advertising failed, young women from Korea, China, Taiwan, Indonesia, the Philippines, Thailand, Vietnam, Malaysia, and the Netherlands were kidnapped or deceived and forced into sexual slavery. Most were teenagers, some as young as 12 years old, and were raped by as many as fifty soldiers a day at military rape camps, known as "comfort stations." By some estimates only 30% survived the ordeal.

Whenever there's a war we hear about the suffering of soldiers, yet we hear almost nothing about the plight of women who are kidnapped and raped, or killed. Often it is the poorest and most marginalized elements of society who suffer most. Throughout history women like this are too often invisible, forgotten and left with no place to turn.

The "Comfort Women System" is considered the largest case of human trafficking in the 20th century. Much in the same way that acknowledgment and awareness of the Holocaust helps to insure it will not happen again, by acknowledging this issue we can prevent another generation of enslaved "comfort women" from happening anywhere ever again.

In the 21st century, human trafficking has surpassed drug trafficking to become the second largest business in the world after arms dealing. The "comfort women" issue illustrates the victimization which women suffer in terms of gender, ethnicity, politics, and class oppression, and how women are still perceived as a disposable commodity. This project promotes empowerment of these and all women, and seeks to establish a path toward a future where oppression is no longer tolerated.

About the Artists
Chang-Jin Lee is a Korean-born visual artist based in New York City. Her multicultural background and experiences have provoked in her an interest in investigating the diverse cultural and social/political issues in our current era.

連結:
1a space - COMFORT WOMEN WANTED
You are using an outdated browser
For a better experience using this site, please upgrade to a modern web browser.