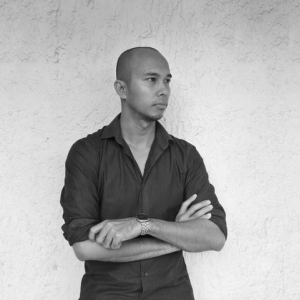 Francis Sollano is a trashion and installations artist known for his contemporary takes on upcycling garbage into wearable art and converting decaying landscapes to lush urban spaces.  A graduate from the University of the Philippines, a self-made social entrepreneur, he incorporates his love for the natural environment in his delicate handmade creations under his own label.   His works have been shown in major cities across the globe, London, New York, Paris, Tokyo, Singapore and Bangkok to name a few and were featured in international design publications.

Co-founder of Youth for a Livable Cebu, he has been promoting his advocacies on various international forums.  He was awarded by World Economic Forum as a Cultural Leader, alongside actor Kevin Spacey, vocalist Bono of U2, internationallly-aclaimed cellist Yoyo Ma, John Green author of The Fault in Our Stars.  He is a member of the Global Shapers Community.  In 2015, he received the highest distinction by the Biritish Council as an Elevate Awardee for using his creativity for different community works. He is also the latest recipient of the United Nations Environmental Program Fellowship Award as one of the Asia Pacific Leaders on sustainable design.  Rappler Online News Media named him as Philippine’s first Creative Mover in 2015.

In 2015, Francis Sollanog participated in GALA ASIA meeting in Taipei, an international network of cultural organisations engaging with environmental issues. With artist' collectives from 8 countries to get to know each other and establish the alliance, including Thailand, Indonesia, Singapore, Japan, Korea and Malaysia.

In July of 2017, Francis is invited by Bamboo Curtain Studio and Creative Reuse Center, presenting his exhibition “Bleached into the Deep” at 435 Art Zone. Also, he will collaborate with Beautiful Taiwan Association and Zhuwei Elementary School volunteers, using wasted flag to create new home accessories such as pillows, lamps and wall arts in six workshops.

About Youth for a Livable Cebu（YLC）

Launched in June 2012, Youth for a Livable Cebu (YLC) is the youth arm of the Movement for a Livable Cebu (MLC). The group was formed by young professionals who have come together in their love and passion to help make Cebu a better place to live in. Through our projects and collaborations with like-minded individuals and organizations, we seek to foster open, constructive, and fun interactions that harness our individual and collective competencies to move us closer toward the livable Cebu we envision.

Our vision is of a livable Cebu inspired by its rich heritage and culture, thriving in socially responsible economies and revitalized urban centers, governed by responsible leaders, and transformed by an engaged citizenry.
Our mission is to engage the Cebuano youth in creative, and collaborative efforts toward building more livable communities.