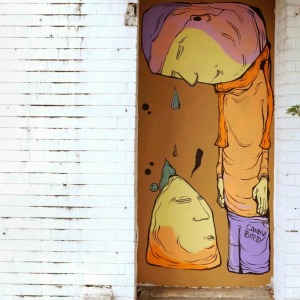 2017 "The others" at Koganecho Area Management Center in Yokohama

Artist Statement:
The concern of my work is mostly about the relationship of individuals and interaction between human and the society in contemporary life. I try to provide a link for audience to connect themselves to the local context/background or issues that are concerned through public mural arts or street graffiti outside museum space. Therefore, many of my works, topics covering from various life stories, community history and society.

I would like to propose a collaborative project “The Others” in Yokohama Koganecho.  Commencing on April 2017, “The Others” is a 5-year art project with its focuses on the East Asia, literature, and street art. The initial concept had stemmed from the environment I was raised in, as well as Taiwan’s unique political and geographical backdrop. Moreover, based on the Indonesian writer Abdul Mubarok’s literature work LIR ILIR, I intended to re-interpret and visualized the world of those foreigners, those wandering, and those neglected.

The Shonenko is one of the subjects in “The Others” in Yokohoma. “The Shonenko” were the Taiwanese child laborers who were recruited to manufacture the Japan Imperial Navy’s fighter planes at the Koza Naval Arsenal in Kanagawa Prefecture from 1942 to 1945 during the World War II. Many of them were only teenagers, where some of them had only finished their elementary studies. The short lines of Mishima in Confessionshad vividly revealed the harsh lives the Shonenko led during the time of war.

Entangled in a complicated historical development of East Asia, these victims of the ideological conflict had also been silenced in the course of Taiwan history, where the stories of the Shonenko were only being noticed increasingly after the lifting of martial law in Taiwan.

The Yokohama Port is half-hour drive away from the formal site of Koza Naval Arsenal and were where the child workers had stepped on and off the land of Japan. Looking back into Yokohama’s history, despite its being Japan’s dominant window to the West, there is also this relatively unrecognized past relation with Taiwan. This work had painstakingly delved into the history of Shonenko and represented this past through art-making to open up future imaginations of the East Asia. At the same time, the connection of the past in the structural aspects of the contemporary society was also examined in order to interpret the historic recurrence and the destiny of humans.