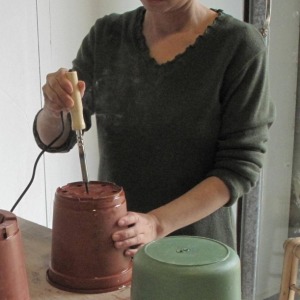 The visual artist, MeiKuei Feu outlines daily life in photo and video. Her artistic exploration deals with the complicity between the uncertainty of memory and the likelihood of the images. She sees her captured images as a place where she lives, visits and resides. She combines thoses images by superimposing and juxtaposing with various materials and architectural conditions in a way to create a place evoking the resurrection of an obscure memory.

MeiKuei Feu completed the bachelor of fine arts at the Tung-Hai University in Taiwan in 1988. She traveled and went at Ecole des Beaux Arts de Lyon to continue his research and creation betwen 1991-1993. Then she received a Master of Fine Arts at the University of Quebec at Montreal in 1999. She received several scholarships from the Conseil des arts et des lettres du Quebec, particularly for his research project-creation The Streets in 2000. Her works were presented in Quebec, British Columbia, Lyon and Taiwan. Born in Taiwan, she lives and works in Montreal since 1996.