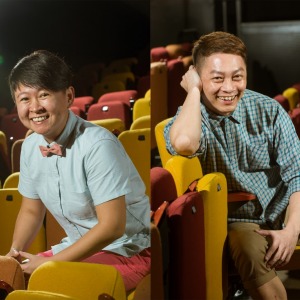 Finger (The Finger Players) is one of the major theater companies in Singapore. They have presented bountiful productions and won good reputation from local and international mass media. Finger has been touring performed around the world, including Africa, Australia, Austria, China, Japan, South Korea, Taiwan and Thailand. Finger is specialized in fusion of the traditional and the modern puppetry, and in combination with other artistic fields.  The founder of Finger TAN Beng Tian and the artistic director Ong Kian Sin come to Bamboo Curtain Studio for one month residency in November, 2012. They will have puppetry workshops, fieldwork and video production with the local community people.

With the Support of

The Finger Players is one of Singapore’s leading theatre companies, known for its visually and emotionally charged productions, and its signature style of puppetry. The company has won numerous awards such as the President’s Design Award 2007, and multiple Life! Theatre Awards including Best Production of the Year in 2005, 2012 and 2013 respectively.

This year, Kian Sin returns to Bamboo Curtain Studio with The Finger Player’s Resident Artist, ANG Hui Bin. Both of them will be working closely with the local residents, including students from Ping Ding Elementary School and Zhuwei Elementary School. Using a series of interviews with Zhuwei’s senior residents as a focal point, Kian Sin and Hui Bin will lead the participants through a few weeks of theatre workshops and rehearsals to devise a puppetry performance entitled “A Letter to Zhuwei”. The aim of the performance is to showcase the participants’ response to the history and development of Zhuwei. “A Letter to Zhuwei” is also a continuation of the project, “Identity and Identification”, created at Bamboo Curtain Studio in 2012. Together with the local community and Bamboo Curtain Studio, Kian Sin and Hui Bin hope to inspire more people to embark on their own journey to discover and embrace the melancholia and beauty of Zhuwei.

2012: Art as Environment - A Culture Action at the Plum Tree Creek

2015: Bamboo Curtain Studio Green Art International Project (Funds by: Ministry of Culture of the Republic of China (Taiwan), The Emerald Initiative-Grants for Cultural Exchanges and Collaborative Projects with Personnel from Southeast Asia)