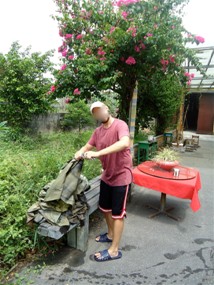 I had the opportunity to meet installation artist Adam Avikainen during my first visit to Bamboo Curtain Studio in August. Margaret Shiu, Founder and Director of Bamboo Curtain Studio and Bamboo Culture International suggested I meet a fellow Minnesotan who was currently in the middle of his three-month Artist-in-Residency that he began in July. Though I met many Minnesotans during my time in Beijing, it is a rare occurrence to find a native of Minnesota in Taiwan, where there are far fewer expatriates that have given up on the Mainland and sought quite realistically greener pastures in Taiwan. I was eagerly escorted upstairs to one of the resident artist workspaces that overlooks Zhuwei, the MRT tracks and the Tamsui River.   After reminiscing about humid Minnesota summers and discussing our recent experiences in Asia, Adam invited me to take a look at his work in progress. Alternately laid across the balcony were thirteen large canvas strips of nine varying thicknesses and threads, meticulously yet seemingly arbitrarily smeared with earth tones. 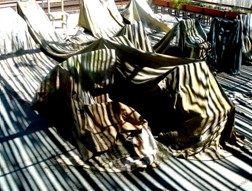 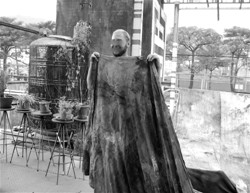 During his residency at Bamboo Curtain Studio, Adam spent much of his time exploring the grounds collecting plants and other organic matter. He would then crush their leaves and juices into liquid pigments with a juicer that he purchased upon his arrival in Taipei. Additionally, Adam applied supplementary everyday materials such as hair conditioner, curry powder and iodine with a charcoaled stick. Starting his work day around 10 am and continuing throughout the day, Adam painted the mashed materials onto the different fabrics layer-by-layer, allowing chance to take part in his artistic process. The natural world played a key role in his methods, as he invited atmospheric elements including recurrent typhoons and the sun to penetrate and influence his material.

Familiar with the realm of drama, Adam’s visual work is entirely integrated with text and monologue.  Though many different tangible materials are utilized, Adam maintains that “poems” are the medium in this specific work. Adam compiled and recorded a five-hour-long poem, which was then translated into Mandarin. An integral part of Adam’s work, the often complex and misunderstood words narrate the visual. 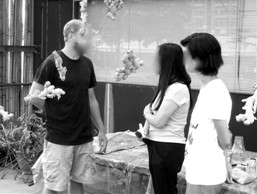 When he wasn’t working on his installation, Adam took advantage of the opportunity to spend time with locals and other resident artists, participate in the Taiwanese barbeque culture and explore the city. I got to know Adam a bit better during our second meeting. I knew he had been working hard recently from the lightened color of his blonde hair. He caught me walking toward the MRT one evening, a messenger bag slung over his shoulder and on his way to visit the Beitou hot springs for what sounded like not the first time. During the brief ride together down South, I was able to understand his previous experiences teaching English in Japan and deduce his natural skills of observation as I listened to his calming Midwestern voice. It was at this time that I started to realize Adam’s artistic perceptions and his overall views of the world, though it should be noted that the inner mind of an artist is extremely complex and can never be fully understood. Despite Adam’s gregarious and friendly character, he prefers to work in private, which became apparent following his decision to install his work in the Taipei Fine Arts Museum prior to the arrival of his peers.

Adam was invited to live and work at Bamboo Curtain Studio in preparation for his mixed-media installation included in the 2012 Taipei Biennial, which opened at the Taipei Fine Arts Museum on Friday, September 28th. The exhibition is organized by German curator and writer Anselm Franke, who previously collaborated with Adam during an international long-term group exhibition in 2010. Entitled Modern Monsters/Life and Death of Fiction, the 2012 Taipei Biennial is inspired by The Monster that is History by Taiwanese scholar David Der-Wei Wang that brings to question the crudity of modern violence and the representation of history through the study of the ancient Chinese monster Taowu. The theme of the exhibition interrogates the current situation of a global systemic crisis, aiming “to bring artists together who question the foundations of our perceptions of history, not as the past, but as actuality.” Globalization, economic growth and modernization are leading toward an irrecoverable future, thus questions of existence have become increasingly more pertinent and necessary.

As the 2012 Taipei Biennial predominantly consists of readymade-like installations and new media works, Adam’s naturalistically fabricated work stand out among the rest. His installation is presented as a transformed edition of “Ginger Glacier,” representing different views of our future world. Consisting of various parts, the installation includes the hanging canvases, planks of petrified wood standing vertically in a line, a grandiose glass box housing a thick rope and a experiential viewing area that incorporates wheelchairs, dangling ginger, curried stands collected from the junkyard surrounding Bamboo Curtain Studio and Adam’s recited poem playing on speakers. When I asked Adam to explain the idea behind the wheelchair he responded: “Camp Courage.” His hope was for viewers to sit in the moving chairs as they take in the enormity of his installation.  His work is focused on ideas of fiction and history, as well as the apparently rapid approach of our world’s end. Claiming that “Fictory=Histion,” Adam attempts to write his own historical fiction.

Born in 1978 in Minnesota, USA, Adam Avikainen has been trained in various art practices around the world. He attended the University of Southern California from 1996 to 1998, where he studied… He later received his Bachelor of Arts degree from the University of Minnesota in 2003 and his Master of Fine Arts degree from the Helsinki Art Academy in 2005. Following the completion of his studies in Helsinki, Adam attended the De Ateliers program in Amsterdam through 2007. He was selected to participate in an Artist-in-Residency program at the Center for Contemporary Art, Kitakyushu, Japan from 2007-2008.

Adam has been given numerous solo exhibitions worldwide since his first solo exhibition in 2005, including at Art Athina, Athens (2007); Sweathertz at De Ateliers, Amsterdam (2007); DAIJOUBU at the Center for Contemporary Art, Kitakyushu, Japan (2008); Karaeiga Swallow at Monitor Gallery, Rome (2009); Indigo Anniversary, Japan (2010); and Rambler’s Association at ARTSPACE, Auckland. Group exhibitions include Aesthetics of Resistance at Assab One, Milan (2006); Just in Time, Stedelijk Museum, Amsterdam (2006); Beauty Unrealized at PSWAR, Amsterdam (2007); Tears of Joy, Amsterdam (2008); Slow Movement Oder: Das Halbe und das Ganze at Kunsthalle Bern (2009); Animism at Kunsthalle Bern (2010); and The Plurality of One at FormContent, London (2010). Adam’s work is included in various prestigious public and private collections internationally, including Stedelijk Museum, Amsterdam and De Nederlandsche Bank. His work can be found in Metropolis M (2008), Slow Movement or: Half and Whole (2009) and Ginger Glacier (2012).

The 2012 Taipei Biennial will be on view at the Taipei Fine Arts Museum through January 13, 2013. Please visit http://www.taipeibiennial2012.org/ for more information regarding the exhibition. 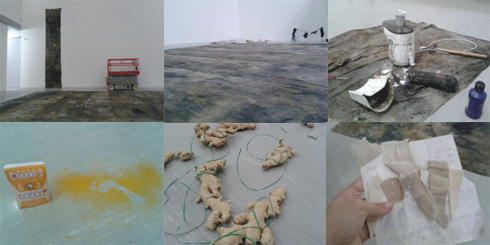