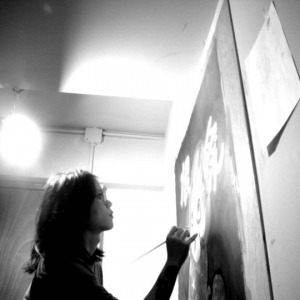 Born in 1984, Taiwan, Taipei.
Music Producer, Artist, Crate Digger, Novelist, Founder of REUSED laboratory .
His style influence from Street Art, Chinese Calligraphy, Taiwanese Temple wall design/religious painting and Music of all kind. His art always about sound/voice of the soul, emotional, and the turth.
As a child, Ho Hoa enjoyed reading comic books and cartoons. After get into the artist world.
Hoa finding a way to combine movement and visualize abstract sound. Doze Green, Wassily
Kandinsky, Philip Morris Glass had huge influence on his work.

Artistic beliefs: Art is a tool, “How to live” and “What is the nature of life” are issues that we consider carefully

In 2019, Ho Hoa was selected as the residency artist of Bamboo Curtain Studio International Residency Exchange Program collaborating with SAC Gallery in Tailand for three months.

If i want to create Asia Style Graffiti art, mixing with public art and street art. I think there is
no better way to start from Buddhism Wall Art.
Chiang Mai is famous by its history and culture. This time i hope to visit few temples, such
as White Temple, Wat Chedi Luang, Wat U Mong, and Wat Phai Rong Wua. Sketch,
document the inspiration. To create art works about temple.