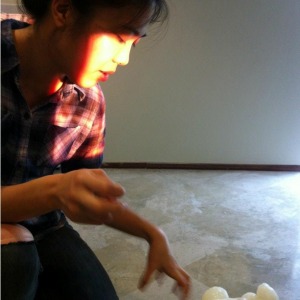 In her practice, Wang reflects on the intricate ties between private experiences and the established narrative set in a world characterized by rapid transnational movement. She is interested in territories where ideas of portraiture, landscape, and migrating bodies converge. Through object construction, material and (moving) image manipulation, processes of des- and re-assemblement, and orchestrating things’ relationships in space, she imagines poetic scenarios in which unique constellations of logic and storylines push and pull against one another, gradually forming shifting identities of their own.

Wang has exhibited work at Taipei Fine Arts Museum; Hong-Gah Museum, Taipei, and National Gallery of Indonesia, Jakarta, among others. She was resident at International Studio and Curatorial Program (iscp) in New York and Asia Culture Center in Gwangju, South Korea, 2018. She will be a guest resident at the Rijksakademie, Amsterdam in 2019.