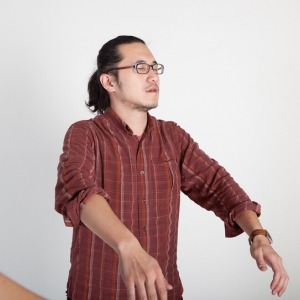 I-Hsuen Chen is a young up rising Taiwanese artist who graduated from Fu Jen Catholic University, Department of Advertising & Public Relations, and received his MFA in Photography from Pratt Institute, in 2012. Currently, he works between Taipei and New York. He works mostly with photography and videos.

In 2012, He participated in the New York Photo Festival (2012), was the only Asian artist being selected. In the same year, he was also awarded with the PHOTO TAIPEI Emerging Artist. In July 2013, I-Hsuen had a solo exhibition, I am Leaving this City, in hpgrp GALLERY, New York; in which he explored the lost sense of belonging when traveling back and forth between the two cities. February 2014, He had another solo exhibition Nessun Dorma in Kuandu Museum of Fine Arts, where he sang the famous aria, “Nessun Dorma,”and replace each phonetic of the song with Chinese character, presented in a way that feels like subtitle, but meaningless. He create this sarcastic statement on how the audience blindly worship something due to its fame not of its significance.

His photography “Nowhere in Taiwan “series, a journey of self-exploration and self-identification, is collected by the Museum of Fine Arts, Houston, as the permanent collection after the New York exhibition. This series is also expected to be exhibit at the Taipei Fine Arts Museum. During his residency at Bamboo Curtain Studio, he plans to continue the project of “Still Life Taiwan”, an extension of “Nowhere in Taiwan”. Through camera lenses, I-Hsuen will making a garbage documentary, to observe and ponder about the culture development and improvement in Taiwan.

Chen was selected as the Emerging Artist of Bamboo Curtain Studio in 2014.