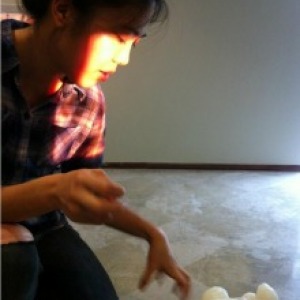 Pei-Hsuan Wang was born in Hsinchu City, Taiwan. Her practices reflect on the intricate ties between private experiences and the outside world in the face of globalization, and furthermore explore the nuanced relationship between transborder cultural, personal, and geographical identification through installation and object-making.

Wang’s solo exhibitions since her return to Taiwan in 2013 include Like Paradise in Jiang Shan Yi Gai Suo, Hsinchu, Mobile Scapehood at FreeS Art Space, Taipei, Formation No.1: On Levitation at Bamboo Curtain Studio, Taipei, and Closer to Home at Tainan National University of the Arts, Tainan. She began a research project on communities in Diaspora in Hong Kong through 1a Space in spring, 2015, and has been conducting a location digitalization project at Sundaymorning@ekwc, Holland since fall, 2015. She will attempt to connect individuals and stories of Diaspora from Hong Kong and Taiwan during her residency at Taipei Artist Village in January, 2016.

In 2017, She investigates the nuanced relationship between transbordered cultural, personal, and geographical identifications through installation, object-making, and image/film documentation.

Made of Star-Stuff: Imaging Outsides at the Center of the World (1a space, Hong Kong)