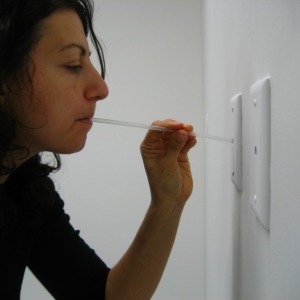 Michelle Rosenberg was born in Manchester, UK but was raised in the United States. She received a Bachelor of Fine Arts and Architecture from the Rhode Island School of Design and practiced professionally as an architect for many years before completing a Masters of Fine Arts in visual arts at Hunter College in New York City.  She lives with her husband and daughter in the Lower East Side of Manhattan. Michelle is the selected artist of “2015 Bamboo Curtain Studio Creative Talents Program”, and will work at BCS for one and half month since 2015/12/01. She was also a selected artist of Kuandu Museum of Fine Art in 2015. During her residency at Bamboo Curtain Studio, Michelle has been researching the unique methods of garbage collection and processing in Taipei City, and she will have an Artist talk at Etat Forum on 2016/01/11.

Michelle artistic practice incorporates many mediums including drawing, sculpture, sound and installation.  She explores the basic building blocks of language and the rules of communication, highlighting their fluidity and digressive applications.  Often her interventions take the form of a game or puzzle, with clues, keys, and other participatory structures. Examples of previous projects include musical instruments hidden in walls, kiosks for human/bird communication, and several site-specific object-alphabets.

Michelle’s project in Taiwan “The Free Alphabet” is an ongoing project by her that takes garbage and commonly found free objects and arranges them into a functional language for use in public space. Inspired by the Occupy Wall Street protests of 2012, the project maps the physical and political variables of public space. The Free Alphabet is proposed as both a code for use by the initiated to communicate undetected in public space as well as a reflection on the discarded items of our material culture. While in Taiwan, Michelle has been working on a Free Alphabet for Taipei that connects objects based on the first sound of their names to the Zhuyin Fuhao (bopomofo) system of phonetic notation. This system of connecting the names of objects to letters of a phonetic alphabet is widely used by children to learn how to read and write. It is a type of knowledge that has been forgotten by most adults. Michelle will discuss the Free Alphabet and show documents from the London and New York version of the project as well as examples of older work.