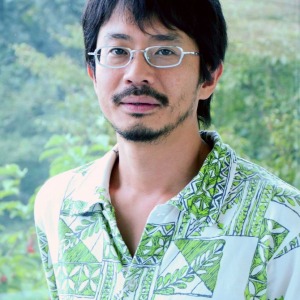 Contemporary artist and stage director. Born in 1968 in Kagoshima, Japan. Now live and works in Japan. Takamine was invited to be the Visiting Associate Professor in Department of New Media Art in TNUA since August of 2015. Introduced by artist Yuan Goang-Ming, Takamine will stay in Bamboo Curtain Studio during 2015/12/01-2016/01/23.

Takamine began performing with multimedia/performance collective Dumb Type, and took part in three performance pieces including S/N. Currently he works in diverse media such as installations incorporating video and audio, photography, video, sculpture, and self-directed performances in which he appears. For A Lover from Korea (2003), drawing inspiration from his relationship with an ethnic Korean resident of Japan, he took up residence in the Tamba Manganese Memorial, the site of a former mine where Koreans were forced to labor, while producing the work. For Kagoshima Esperanto (2005), he filled a space with soil and discarded objects and projected text in the dialect of Kagoshima and the international language Esperanto on to it. In Japan Syndrome – Berlin Version (2013), he transformed an area in front of Kyoto City Hall into a pulsating dance floor, with 1000 viewers participating. These and other pieces blend incisive social critique with physicality and humor, with Takamine consistently investing his own physical presence and humanity’s flesh-and-blood nature in works that lay bare shared but unspoken taboos and our complicity in them.