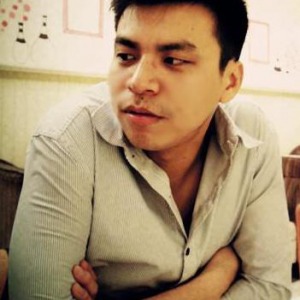 Born in 1985. Lin, Chen-wei graduated from School of Theatre, Taipei National University of the Arts in 2015, now works as a reporter, visual artist, visual art critic, performance art critic and community art festival curator in 2014( Longtan / Xingwu Town in Taoyuan County, Taiwan). He is member of Outsiders Factory( independent curator group in Taipei) . His essays and critics published over 10 kinds of magazines and media from Taiwan , Singapore and Macau, Such as Artist, ARTITUDE, Art. Investment, Art Plus，4-Way Voice...ex. Also in oversea magazines, such as Theatrex Asia (Singapore) and Performing Art Forum (Macau) ), etc. In 2016, Lin is elected to be one of the Creative Talents of Bamboo Curtain Studio, and will have his residency for 2 months starting from March 1st.

During his residency, Lin, Chen-wei considers himself as a “recorder” much more than a “creator”. In his impression, there are different South-east Asian histories interwoven in Guandu, Zhuwei, Bali, Tamsui areas: Tamsui Dan chiya pong derived from Phú Quốc in Vietnam and the memory of the National Revolutionary Army in Hunan; one of the ancient names of Guandu is “Castillo”, where the Spanish from Manila had once stayed; A lot of Vietnamese eateries open around Zhuwei community nowadays while there are many foreign spouses come from Vietnam. Lin’s ideal residency is to initiate the experimental action of continuously creating “South-east Asia community museum” – to let the stories from South-east Asia around Taiwan be recorded, developed, and thinking of the possibility to build a South-east Asia community museum formed with “the memory of water” in Zhuwei.