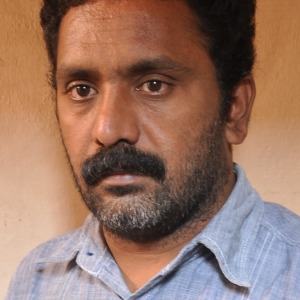 As a yoga practitioner and artist, Krishnaswamy’s works began as an extension of his yoga practice which made him aware of the vastness of the body and its limits. He tried to explore these through a visual medium, performing yoga on canvas, leaving behind imprints of his physical and mental state of mind. Following this body of work called the Kundali Rising he began to explore his own roots, what makes him the person he is and leads to certain physical and mental characteristics. Collaborating with a photographer he produced a body of photo and video performances (Contradicting Equilibrium of the Existing Senses) in his village, burying and transforming himself through the native earth. He explored the notion of surrendering to the earth that nourished him. Hailing from a background of vessel merchants, he also did a series of performances where he literally emerge from the womb of the vessels. Inanimate objects produce animate subjects, so where does the boundary between living and non-living lie? The question of life, death and consciousness and the grey areas between these began to engage him (No Truths No Lies – This Form is Breathing). He looked at the question of disguise, as a kind of mask that humans adopt and as the human body itself as a kind of disguise for the soul (Disguised Forms). The market place and the desire for money that fetters the mind became a pressing question for me that he explored in his work Existence between the Unfettered Mind and the Transitional Object. His most recent performances have been on one hand about adopting disguises and on the other hand of surrendering himself to nature without any disguise. Engaging with different states of mind and its link to the body his works deal with the question of existence, consciousness and the difficulty in comprehending the Unknown.

TIFA Working Studios resides in a 1910’s Art Deco style hotel in Pune. Being located in the marked centre of the city, it offers a pulsating urban landscape allowing for strong connects with the community.

With a focus on discussion and collaboration, TIFA introduces modules to spark ideation, conceptualization, expression and meticulous execution of projects. Employing new faculties and resources available we encourage the exploration and development of forthcoming realities.

TIFA as a platform for exposure and creativity, will present a holistic and trans-disciplinary conference in the city by connecting with international communities.