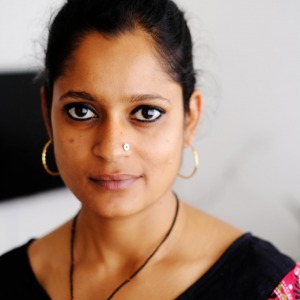 Shraddha Borawake is an Interdisciplinary Cultural Producer, based in Rotterdam, The Netherlands. She started her career with a photographic practice in 2000 as a fashion photographer, assisting commercial projects in Mumbai for campaigns like Pepsi, Coca Cola, and editorials for Cosmopolitan, Elle Magazine under her mentor Farrokh Chothia in Mumbai. She then moved on to complete her training in traditional darkroom practices at the International Center of Photography in New York City in 2006. Her works were exhibited at DUMBO Arts Festival, New Orleans Photo Alliance, Union Docs and Zimmerli Arts Museum. She was the recipient of the Johnson and Johnson Fellowship Program in 2007.

In 2011, Shraddha completed her Bachelor of Arts from the Gallatin School of Individualised Study – New York University, graduating with the Leo Bronstein Award for Academic Excellence in Interdisciplinary Approach. In New York City, her video based collaboration with Kinematik Dance Theatre Company was performed at the Highline Ballroom and Wave Rising Series in DUMBO in New York. As well it was as a part of the Hollywood Fringe Festival in 2013 at the Elephant Theatre, Los Angeles. She experimented along with her colleagues at NYU with a public art projection work on the façade of the Museum of Art and Design, Columbus Circle, NYC.

In 2012, she returned to Pune city, with an interest to deeply engage with the grassroots of her hometown, as a result of expanding her practice beyond individual authorship, exploring the role of artist as facilitator. Here she brought her knowledge working in Public Art with Creative Time- New York, and artist-run self organized abilities into creating The Good Artists of Pune – an open networking platform for the arts that brought over 15 artists from all over the world to engage with a large number and variety of local artists in Pune City over the course of the next 4 years. This community-building project impacted the city’s young contemporary art scene, involving upcoming institutions, established local galleries and eager patrons in an inclusive environment; providing inspiration and a solid foundation for artistic exchange and growth.  This culminated with the dynamic KHOJ International Artists’ Workshop in 2015 under the mentorship of Pooja Sood.

She will be creating meals, events, performances and displays throughout the course of the residency to test the boundaries and limits of knowledge sharing in art. Exploring the ability of the artist to be a channel and leader for the community, rather than to produce for an industry and commercial interests. The act of making and the maker will be put under scrutiny. Old knowledge systems will be tapped in to aid this learning, through research of local Taiwanese Indigenous history and its contemporary traditions.

Shraddha Borawake is selected as the residency artist of Bamboo Curtain Studio "2017 Intenational Residency Exchange Program" which collaborate with TIFA, India. This on-going cooperation runs in its third year.

Through the month long residency project, Shraddha explores the dynamic of internal versus external through the study of material in its representations and resonance. In a light and shadow site-specific display created with reflective and refractive material. She has created an installation using discarded objects sourced from the near the Beitou trash center, photographs of her discoveries of mythology, ecology, Taiwanese indigenous culture and poetic formations created through deconstructing the Hanzi script of the Taiwanese language.

She explores her multi-faceted role of artist as a maker, explorer, leader and facilitator. This multi-layered work is a convergence of these parallel research strains and vibrant community-based interactions.  She grounds her final display at Open Studio, in the emanation of the spiritual aspect of -the Self - as an internal critical seeker in relation to the external Universal realm of the existentialism through materiality. In this quest of experimenting with the artistic process, the final display of found objects, explores a semantic using a highly experimental language that she calls Cosmic Methodical Individualism.