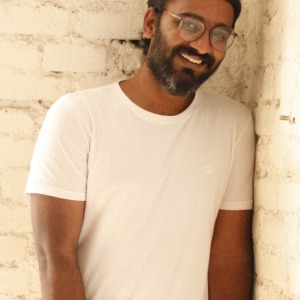 Madhu Das (India) lives and works in Mumbai. His artistic practice incorporate multi-disciplinary expressions; focuses on  investigating social and political issues by getting close to landscape, both physically and psychologically, the work traverses between fact and fiction, dealing with the projection of identity onto the social and natural world: in a way that the two are woven together in the space.

His work has involved the spaces in both a narrative sense and as a site of memory to re-narrate historical events as a way of plotting connections between the particular and the universal. Subjectively, he adapt aspects of material culture as well as methods from anthropology, allegorical fiction as conceptual tool, which later extends to the space of the viewer, from the point of a storyteller, exploring exciting linguistic devices and imagery with a sense of irony and paradox.Awaaz Do- A Call to Resistance" A Sahmat curated by Ram Rahman in Times Lit Fest at the Mehboob Studios, Mumbai, India (2015)

He was visiting fellow artist at the Harvard South Asia institute, Cambridge,USA (2017), His works have been shown at the HH Art Spaces, Goa, India (2017); Curriculum by Creative Time Summit in partnership with ArtOxygen & Studio-X, Mumbai,India (2016); Awaaz Do- A Call to Resistance" A Sahmat curated by Ram Rahman in Times Lit Fest at the Mehboob Studios, Mumbai, India (2015); The Conflicted Issue of Change and Urbanism – a compilation of video art curated by Gayatri Sinha at the Dr. Bhau Daji Lad Museum, Mumbai,India (2014);  Sarai Reader 09, curated by Raqs Media Collective at Devi Art Foundation, Delhi, India (2013);

The research is based on collaborative work with various craftsmen communities in Taipei. It examines indigenous knowledge systems- how they are transferred from one generation to another during moulding and practice, how it co- evolves incorporating new ideas and material, there function within the markets. Art is to create a situation where many people mutually interact with one another to the specific situation. Belonging to different class and ethnic backgrounds to communicate, work together, and create a political solidarity. This produces shared cultural meanings questioning the boundaries and inter-relation between the objects. Neither is art a 'product' an end of the creative process but, seen as a prefix or a medium to trigger an interaction. Here the process of experiencing something new is paramount. The project outline the possibility to open up new aesthetics and processes looking at authorship, labour and new ways of sharing / making.

On completion, the research examines craft making systems in contemporary practice - how they function within the cultural studies enable us to see how the visual representation and subject is interpolated into ideological, political and cultural structures of power. the work would culminate as a visual presentation In the form of interactive work at the Bamboo Curtain Studio, I create a installation where the viewers/audiences mutually interact with one another in the specific situation through In the form of a visual essays,notes and interviews to re-imagine a cultural history.