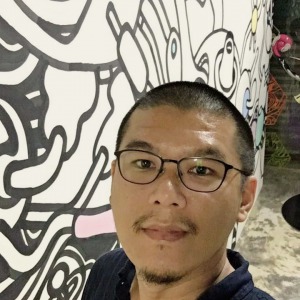 Tang Wei Hsu (b. 1980 Taiwan) is an international artist based in New York. He is a recipient of the Asian Cultural Council Fellowship (2009) and was a residency artist of the international studio & curatorial program, Brooklyn (2011).

As an international artist, he travels widely for varied projects and installations taking place in Taiwan, Hong Kong, Singapore, Demark, Australia, the USA, and so on. In 2013, Hsu collaborated with New York City DOT (Department of Transportation) and carried out a public art installation project: Magic Monkeys. Series sculptures were shown in Sculpture By The Sea in Denmark (2015) and Cottesloe, Sydney, Australia (2016, 2018).

Hsu's large-scale stainless steel sculptures and the drawings of creatures (organic patterns) that he constantly composes in white and black lines, which are seen as his individual idiosyncrasy and artlang, have gradually gained him worldwide publicity.

In 2018, Hsu was invited to be part of Bamboo Curtain Studio International Resdency Exchange Program, collaborating with Baan Noorg Collaborative Arts & Culture (Thailand). The resiedncy period was from 4th Nov. to 15th Nov.