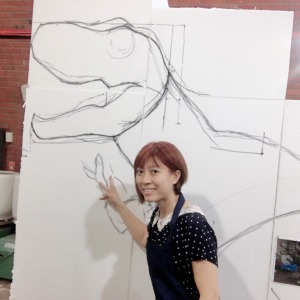 Huang Wei-Chien graduated with a Master's degree from the Institute of Visual Arts, National Chiayi University, and was artist in residence at the Shigaraki Ceramic Cultural Park, Japan; Bywood of Ciaotou Sugar Refinery, Kaohsiung, Taiwan; and the Art Site of Chayi Railway Warehouse, Taiwan. In the 38th CICA International Competition of L'Alcora in 2018, Huang was not only finalist, but also received a special award as the public's favourite. Her work also won the “Creative Design Award” in the 2016 Ceramic New Product Award, Taiwan, and was nominated for the 2011 Kafenberg International Ceramic Biennial, Austria. She has exhibited internationally, including in Taiwan, Japan, Korea, and the Netherlands.

Rather than leaning on traditional techniques, Huang's work employs clay as a medium of personal emotion. Her inspirations are sourced from daily life; sometimes she plunges right into them, sometimes she observes from the outside. Through these interchanging perspectives, her growth becomes embodied in clay like an alternative philosophical script. In recent years, her relationship with the material has evolved from the control she sought as a younger artist, to a more collaborative interaction, negotiating her own self with the self of the clay to find a harmonious coexistence, respecting the character of the clay, just as one ought to respect the character of nature.