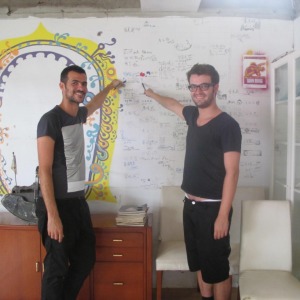 drift
1. Walk slowly, aimlessly or casually
2. Move involuntarily into a certain situation or condition
3. Digress or stray to another subject
4. Slow movement from one place to another

Drifting is a collaboration proposition of performing artists Gustavo Ciríaco (Brazil) & António Pedro Lopes (Portugal). This contextual project takes the artists to 3 different cities (Rio de Janeiro, Taipei, Porto(Portugal) to map the streaming affections in these cities through different sorts of meeting. Following an episodic logic, each city is a new chapter on a travelling exercise of bridging people and places.

Drifting takes inspiration in Italo Calvino’s Invisible Cities, wherein a particular story describes a village where one sees lines of different colours connecting the inhabitants displaying, each of them, the affections that stream through that community. A love tie in full red colour is described to go from one lover’s window to another lover far down the street. Friendships, family and working ties, but also relations of hatred, distance, platonism, empathy, repulse or fear are made visible through these crossing lines. They shape an invisible network of affections, shared lives and stories across the physical spaces they inhabit in a city.

Having in mind Calvino’s imaginary village, we started wondering how it would  be like to follow these ties in a real contemporary city like Taipei. This next Saturday we invite you to join us in our open studio and be a close witness to our wanderings in Taipei.

Gustavo Ciríaco is the owner of an accidental trajectory, initiated in Political Sciences, passing by improvisation, dance, theater to then drift into performance and contextual works. In Europe, Brazil, and Latin America, he participates intensely in international projects and collaborations with other artists from different backgrounds. His works are marked by a fine investment in the creation of “here and now” situations and inter-relational fictions. In 2010, his work Here Whilst We Walk (2006), seen in more than 20 cities, is part of the exhibition Art and Dance since the 60's, of Hayward Gallery, in London. Drifting- Taipei marks Gustavo's Première in Asia. Gustavo is a partner of Inov Art, an Initiative of the Portuguese Ministry of Culture, coordinated by DGArtes.

António Pedro Lopes (Portugal 1981) is a Performer and Performance Maker. After studying musical theater, theater studies and choreography, he works internationally and is a nomad. In his path he stands out: a capacity of infinite mobilization, his vagabondness, the travel, "holding on to nothing with everything I've got", www.sweetandtender.org, the collaboration with choreographers Marco Berrettini, João Fiadeiro and Jérôme Bel and the co-signature of many collaborations with other artists. The Project DRIFTING- Taipei is possible due to a scholarship of Inov Art Program, an Initiative of the Portuguese Ministry of Culture, coordinated by DGArtes.