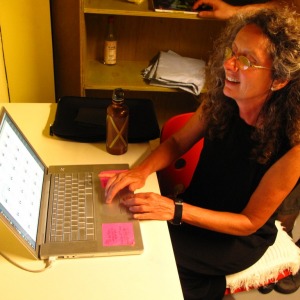 Karen McCoy's primary work for the last two decades has been large-scale, sited environmental sculpture. McCoy focuses on the relationship between nature and culture, creating work based on extensive research into the geological, cultural, and social histories of each site. She also works in video, photography and makes drawings and prints. Her most recent installations have been for the 125th Anniversary of the Kansas City Art Institute, a piece commissioned by the Spencer Museum at the University of Kansas, Sculpture Key West and Guandu Nature Park in Taipei, Taiwan. In 2007 she received a three-month grant from the Asian Cultural Council to conduct research in Japan on the relationship of culture, landscape, and built form. In 2003 she was selected as the lead artist for the Lewis and Clark Bicentennial ArtCorps project, funded by the National Endowment for the Arts. In her work for this project, McCoy and her collaborators paid tribute to the Native Americans who had inhabited the area at the time of the Lewis and Clark expedition. Other grants and commissions have allowed her to create work Japan, France, Denmark, Lithuania and in the U.S. in California, Massachusetts, Rhode Island, South Carolina, and Wyoming.

Ms. McCoy has received support from the National Endowment for the Arts and the National Assembly of State Arts Agencies, the Andy Warhol Foundation (under the auspices of the Camargo Foundation), the Asian Cultural Council, Artslink, and the Art Association and Land Trust of Jackson, Wyoming. She has had numerous residencies, including the Tokyo Wonder Site and Youkobo Art Center in Tokyo, Japan, the Camargo Foundation in Cassis, France, the Kala Institute in Berkeley, California, the Ucross Foundation in Wyoming, and the Djerassi Foundation in Woodside, California where her residency was awarded the Pritzker Foundation Endowed Fellowship for a distinguished residency.

Karen McCoy has had solo exhibitions at the Williams College Museum of Art in Williamstown, Massachusetts. Pindar Gallery in New York City, the Camargo Foundation in France, and the Jan Weiner Gallery in Kansas City, Missouri, She has participated in many group exhibitions, including shows at the Allandale Farm in Brookline, Massachusetts, theYerba Beuna Arts Center in San Francisco, Kala Art Institute in Berkeley, California, Youkobo Artspace in Tokyo, Japan, Project Space at Paragraph with the Urban Culture Project in Kansas City, Missouri, the H&R Block Artspace in Kansas City, and Northern Illinois University Gallery in Chicago,

Karen McCoy is an associate professor of art in the sculpture department at Kansas City Art Institute, where she has taught since 1994, serving as chair of the department from 1994 to 2003, and as Acting Chair, 2010-11. Born in Missouri, Ms. McCoy earned an M.F.A. degree at the School of the Art Institute of Chicago in 1978.