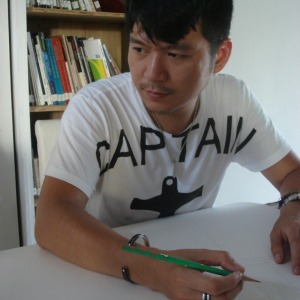 Born in 1977 in Taipei of Taiwan, Hsi Shih-Pin specializing in sculpture of mixed media space received an MFA degree Plastic Arts from Taipei National University of the Arts (TNUA).Having been mainly centered on the basic structure and form of daily objects for his creations, he has created covert and peculiar forms and spaces through the technique of con/destruction; he further reveals the peculiar and changeful thinking of construction and abolition by referring to the spiritual technique of classical drill and creation loop of nature interpretation, in hopes of delineating the new contours of contemporary sculptures in digital era. Hsi’s distinctive presentation in plastic arts has led him to participate in plenty of reforms of public space and environment arts and international artist-in-residence programs for years. His works once earned him Kaohsiung Awards 2008 Selected Prize and 2007 Outstanding Art Work Prize of Fine Arts Department, TNUA. Having kept introducing his personal works since 2006, Hsi is living in Taipei where he devotes much of his time to artistic creations.