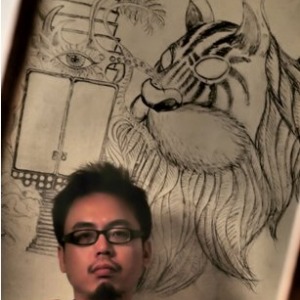 Chou, Chien Pang is an artist with law and politic background. He did several different jobs (laws, politic,telecom and on-line music) before becoming an artist. Chou have deal with the issues about the communication of people in several fields. During that time, he began drawing and combined his drawings with jobs. Then, he chooses to be an artist. In his artworks, Chou attempts to examine the problems that a metropolitan lifestyle make distances in human relationships. He searches the possibilities in humanity and hopes individual will communicate with each other through art; so the multitude will not suffer from isolation and rebuild the connection with people, society and the world. In 2015, Chou’s project “Art Bus” is selected by Bamboo Curtain Studio (BCS) as the “Vision Exchange Project with BCS”. Chou is cooperating with BCS in “Art Bus” project now.