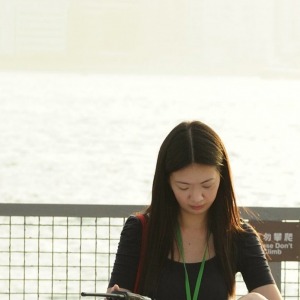 Stephanie Cheung graduated from the University of Hong Kong, double majoring in Fine Arts and Comparative Literature. Having completed an MPhil on public art in Hong Kong, she is now a PhD candidate researching on participatory practice in Chinese contexts under the Research Centre for Transnational Art, Identity and Nation of the University of the Arts London. She is sponsored by Angela Gill Johnson award for two months residence in Taiwan. She received an ACC Fellowship in the same year.

Stephanie is currently Curator of the Hong Kong Institute of Contemporary Culture’s MaD (Make a Difference) platform and oversees its programme design and creative directions.

As an independent practitioner, Stephanie is especially interested in art beyond the white cube. She has been commissioned to curate art in public venues, and specializes on relational aesthetics, collaborative processes and community projects. She sees curating as caring, and art as an arena for exploring better ways to inhabit the world.

Stephanie previously taught art history and theory at the Chinese University of Hong Kong and Lingnan University. She currently teaches at the Hong Kong Art School and helps the Macau Museum of Art on docent training. With a few friends, she founded artmatters, an education initiative to make art appreciation accessible to people from all walks of life, and relevant to critical issues of our time.

When she makes art, she takes open form as a format to explore intersubjective dialogues, and those between difference voices in oneself. In a primarily process-based practice, she shapes perception and relations through light touches on tactile materials. Text is also a medium in her probe into the multivocal.

Stephanie is also a writer and has published in local and regional journals, including World Art, CAA Review, Asian Art News, Artist Magazine, AM Post, Hong Kong Economic Journal, etc. To reach a local mainstream readership, she blogged at The House News. Her writings focus on art’s connection with its audience and the social environment. Besides critical and historical writings, she also writes poetry.

During her residency period, Stephanie travelled to Lanyu and befriended indigenous resident Ah Wen and his volunteers, who are taking the initiative to tackle excessive solid waste on the island. Their encounter grew into a storybook, which tells this tale while reflecting on sustainable development. Stephanie's residency also coincides with In the Name of Art: Hong Kong Contemporary Art Exhibition at MOCA Taipei. As community outreach for her exhibit Etudes for the Everyday, she presented "Zhuwei Gourmet Tour" with the support of BCS.

Angela Gill Johnson came to Taiwan to celebrated 50th anniversary of SHCC with her beloved classmates in autumn 2014. Ｗe lost her suddenly before the end of this trip. In order to memorized her, her husband, Richard Johnson, and SHCC class of ‘64 decided to do fundraising in order to support Hong Kong creative talent to spend two months residence in Taiwan. At the same time, this creative talent will engage with local artists to work together. After this residence, we will send the selected creative talent from Taiwan to Hong Kong for further research. Bamboo Curtain Studio is assigned to evacuate this project and assist her research in Taiwan.