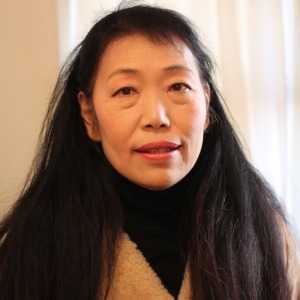 After arriving in Taiwan I became aware of its history of sugar production. I also realized its connection with Japanese colonial occupation which raised some emotions in me. Sugar tastes sweet but I understood its history wasn’t sweet. By knowing that history I felt more emotion in using sugar and decided to use sugar in Taiwan as the material for expressing some Asian anxieties.

Using a mold to cast sugar I made a low dinner table with tea cups, dishes and bowls that looked like a traditional Asian table set for family dinner. Each utensil was made from sugar and placed on the molded sugar table top. I remembered that when I was a girl in Japan an idealistic image of the family always showed them around a dinner table, sharing food and conversation. When I presented the sugar table installation I intended that the audience would complete the work by pouring liquid into the sugar cups. The process of liquid melting the installation would be a metaphor for the pressures of the changing world, such as modernization and globalization, affecting the ideals of family. I thought that I would use only Coca –cola as my liquid, this being a symbol of  pressure which came from the West, but I thought more and decided to also use tea, for its strong association with the East. This because even though using traditional things, no matter what, each new generation brought change.