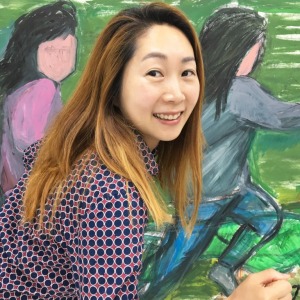 Seongeun KANG was born in Iksan, Korea in 1982. She received her bachelor degree in Oriental Painting from Ewha Women’s University in 2006 and MFA in painting from Korea National University of Arts in 2009. Currently she is a Ph.D. candidate in Ewha Women’s University. She participated in Iksan Creation Center Residency program by Iksan culture Foundation between 2014 and 2015, and joined in Creation Center Residency program in Jeonbuk Museum of Art in 2016.

She had the first solo exhibition “Their houses” at Ga gallery in 2009, and then three more exhibitions including “Lounge Project: #3 Kang Seong Eun”, “Pencil Classic” at Artsonje Center in 2011 and “AT Night: strange and clear” at Gallery Chosun in 2014. Recently she participated as an artist “ THE FAR GAME” in the Korean Pavillion, Biennale Architettura 2016 Biennale di Venezia.

Seongeun is selected as the residency artist of Bamboo Curtain Studio "2017 Intenational Residency Exchange Program" which collaborate with Jeonbuk Museum of Art. Seongeun will stay in Taiwan for two month, from 4th of July to 28th of August.

I made “Walking map” after the observation of the window grills along the walking. Various and beautiful patterns of the window grills were found in this area, which is an important visual characteristic to me. Windows and Window grills are an essential part of the appearance of the house. It seems that people has been taking care of the exterior parts.

Having “Walking map”, people can find various window grill patterns along the way. It can help people to travel and take a walk here with different point of view. In addition, I made memorial stamps with the patterns so that people can perceive it as a memorial geographic feature but not just an ordinary context.