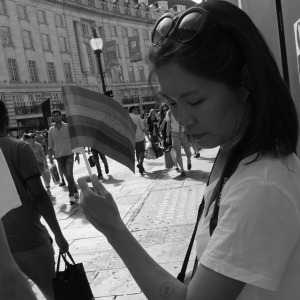 Cia Hsinyuan Lee is an contemporary artist and also an educator. She currently lives in Shin Ying District in northern Tainan.

Her creation started with fragments of her childhood memory. The main object of her creation have been extended to the illustrations in the Chinese version of Western storybooks. Through her works she not only inquired herself but also discussed how the translated texts have been identified, misrecognized and confused within her memory.
After graduating from Graduate Institute of Plastic Arts in Tainan National University of the Arts in 2008, she reflected on the connections among artistic creation, herself and societies through various work experiences, such as being a teacher, a display decorator, a waitress and a saleswoman, and living experiences in places other than her hometown, Shin Ying. The life in 2012, the year of living in Germany, has become an important turning point in her creation life.  After returning to Taiwan, her creation and work goes deeper into the concept of “a return to the local”. She started to re-understand her living environments and history and present she’d never understood; she reorganized the connections between the local society and herself.  Consequently she launched a creation and life project with no expiration date. It’s called “Place”.  The creation materials came from paintings, photographs and gradually to spatial and audio installations. Through the compounded form, she responded to the thoughts and understandings shaped in the interaction between people and cities during the process of doing on her project. In the second year of doing her project, she established INCORRECT Lab and taught courses in community colleges, junior colleges, and elementary schools in rural areas. As an artist coated with an educator’s uniform, she has been experiencing artistic creation with the local citizens and students. They’ve also experimented and practiced together on connecting art with local life. With them, she created little but new memory and relationships in suburban areas and local places.

In Bamboo Curtain Studio’s "2017 International Residency Exchange Program”, Cia will be underway the 2nd chapter of the “Place” project: Unsettling and Hope. Bringing the life and creation experience in Taiwan’s suburban and remote areas from the “Place” project, she will connect and communicate with other countries.