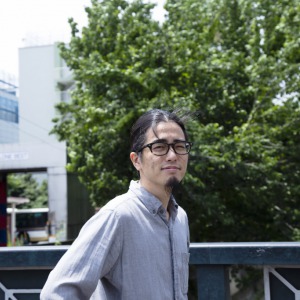 Hidemi Nishida was born in Otaru city in Hokkaido in 1986, currently lives and works in Tokyo. He studied Design in Sapporo and obtained a Masters of Fine Art at the Bergen Academy of Art and Design in Norway. His architectural background brings together functional making with an interest in intimate transformations of our environment. Nishida questions our milieu, deconstructing and adapting existing structures or materials or even whole landscapes in order to refresh our view of the world. His structures create a presence but are also ephemeral, often using reclaimed or found materials to create a bricolage of references to place, time and memory.

His interests also include the archive of the memory of specific places, its past significance and the accumulation of personal memories of people. He has recently archived 50sqm of ground on the site of a decommissioned railway, which was used to transport coal, scanning the whole area with a simple A4 scanner. This creates archival material depending on each situation, with the use of different methods such as photography, video and sound.

Nishida is also engaged in the social activity for cultivating individual’s perception to be aware of the beautiful detail of the world. He often makes a gathering, talk session, lecture to share and exchange various ideas to experience the world with others. From the Spring of 2017, he also engages as a dramaturg in Arts Council Tokyo’s experimental project called Rest In Peace Tokyo which is directed by one of the leading dramatists in japan Hitsujiya Shirotama.

In 2018, Nishida is selected as the residency artist of " Bamboo Curtain Studio International Residency Exchange Program" collaborated with Koganecho Area Management Center (Japan), staying at BCS for 3 month since the 1st of May.

Dozen Tables Project is a series of various events under the simple rule I set. The rule is; “Nishida makes and manages a place to share with others every weekend during the residence period in Bamboo Curtain Studio. And it must be different shape every time”. Thus, total events should be twelve times in three months.

The platform for this event series is a table. I produce a space setting a table in the centre. It might be different size, shape, situation, setting, and atmosphere every time. And I bring something to place on the table such as presentation, screening, performance, object, etc what I got interested and want to share with others on the week. Anybody who interested to share something or refresh their perception of the world can join to the event. Even no body come I open the lounge and document whole process. In the end I analyse what was really happened and what was really achieved during the activity. It is an experiment to possibility of space, time and relationship.