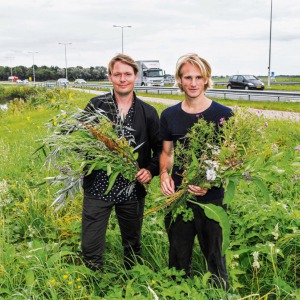 De Onkruidenier explore forms of symbiosis and circularity between the realm of the cultural and the natural world. Through on site participatory fieldwork and research, their artistic practice develops new interpretations on the relationship between human and nature. Their work transforms familiar everyday actions of classifying, cultivating, preparing and consuming of plants into experiential narratives. Their practice focuses on the evolving qualities of halotolerant organisms; species that use salt to their benefit in a world wherein 97.5% of all water is salty. To which extent can we, as humans, change anthropocentric perspectives on our environment towards plants? With salty waters entering the rice fields of Taiwan due to structural over pumping of groundwater the Onkruidenier is keen to explore what artistic and design thinking can contribute to balancing and closing the loop of the interconnected cultural and environmental factors in relation to salty water and plant-life.

Project ‘The halotolerant man’ researches the visible and absent roles of salt in existing landscapes. By collecting and creating new narratives about human - non-human relationships in salt dominated landscapes, the halotolerant man redefines our interaction with salt in our own environment, creating space for experimentation, collective experiences and dialogue. During the project a new type of perception on the actual landscape will emerge. Collaboration with invited local residents, experts (farmers, ecologists, scientists) and participants (artists, designers, etc) leads to expressing new implementations for human evolution, narratives that halophile plants tell and insights for a halotolerant future.

With the project proposal ‘The halotolerant man’, de Onkruidenier aims at the development of a research project that leads to the design of a new approach to salt dominated area’s. A series of edible experiences and stories will emerge to create a new halotolerant ecosystem in the way we look at our environment.

01 Urban Wilderness
More and more people are attracted towards living in an urban environment. The city climate is not only a thriving environment for humans, it has also become a varied and diverse place for plant species; plants that feel at home between pavements, concrete, construction sites, roads, walls and cracks of the city. The classic division between the city wall and rural landscapes has dissolved, which allows us to define new ways on perceiving nature.

02 Human evolution
What can we learn as humans from plants adapting to their changing ¬living conditions?  Cultivating plants has been subject to change, according to human preferences. What happens if we would change the ¬perspective to plant life; how can we involve the climate adaptive capacities into -human evolution? A line of inquiry, we’ve been looking at the halotalerancy of plants, growing near the sea. These are plants that can actually tolerate high quantities of salt.  Nowadays, many of us are near the coast and with a sea level rise and trying to protect the land from the influences of climate change. With all our means we try to get rid of salt percolation of the fertile soils. How sustainable is this system? What can we, as humans, learn from the evolving qualities of halotolerant (salt tolerant) plants, using salt to their benefit. Keeping in mind that we live in a world where 97% of all water is salt water, shouldn’t humans become a halo tolerant species? Can plants ¬provide a renewed relationship with our current landscapes in a ¬drastic changing climate?

03 Our relationship with Food
In ancient development of cities, defense banks or city walls separated the urban area from the rural area as a membrane between two different environments that were interconnected in a symbiosis. Farmers and citizens took really good care of each other because they depended on each other. Many crops like rice, fruits, grains and vegetables were cultivated near the city. The harvest was brought to the city while excrements would return to be used as fertilizer to the soil. The directly visible production lines between plant and product have become increasingly complex and part of a global market.

04 The unlimited dimension of plants
The purpose and different applications we apply to plants is culturally depicted. What is a weed in one part of the world could be a vegetable elsewhere. Or a botanical garden plant could be an invasive species elsewhere. We’ve learned that some plants in the Netherlands are labeled as weeds, garden plants of vegetables can have a different status somewhere else.