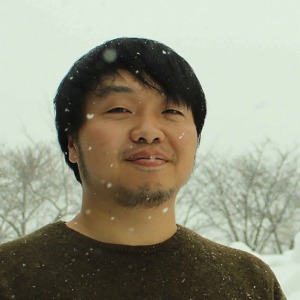 Daisuke Kuroda was born in Kyoto in 1982. Kuroda has been producing videos, sculptures, and installations that focus on physical conditions of topography and climate, and the human stories of history.

Since beginning his university days, he has been based in Hiroshima for his art activities. The main themes of his work were events in the Hiroshima and Setouchi Areas, but after the earthquake, he began to produce artworks based on harmonization and the relationship between “civilized matters” and “natural matters”. In recent years, he has conducted field work in Tsushima and South Korea and visited local art exhibitions and residencies, coming up with kinetic installation works that use images and electric appliances to show the relationship between geographical features and civilization. He has worked in a wide range of areas including researching Heihachi Hashimoto, a sculpture, leading “Team Yameyo” and operating the Hiroshima Art Center, in addition to his personal art activities.He is currently researching the history of modern sculpture in East Asia.

My work is about making visual the relationships between physical phenomena and history and language. My art-making changed significantly following the 2011 Great East Japan Earthquake and the Fukushima Daiichi nuclear disaster that followed it. Until the catastrophe, I had explored history and language via Marcel Duchamp’s notion of “infra-thin” (e.g., the warmth of a seat which has just been left) in modest, ephemeral objects and installations. After the earthquake, I turned to natural occurrences such as wind, whirlpools, and rain, along with mutable, dynamic systems like oceans and mountains. I began making works that echoed the kinetic transformations inherent in physical phenomena. When the rain falls the mountain crumbles, when the mountain crumbles houses are swept away, when houses are swept away the bodies of people within are torn apart in an instant. No matter how celebrated or clever you are, when a chunk of steel or stone flying as fast as a swallow strikes your head you’re dead. In this way, everyone’s life is profoundly ruled by physical phenomena. Our history and language can be seen as nothing more than the convenient tales we tell in the face of the manifold workings of the physical world. If the tsunami has led me to despair, it has also fostered the ideas mentioned above. I have come to see history and language and physical phenomena not as opposing themes, but differing perceptions of the same event. I am interested in how the relationships between these perceptions form and transform, and how we humans fit into the equation.

My plan is to research and create a work based on the Taiwanese international exchange students (and their students and student's students) who studied under Tatehata Taimu at the Tokyo Fine Arts School during the 1930s. This time saw a great influx of foreign students, and young people from many countries came to train to become sculptors. After their studies with Tatehata, many students returned to their homelands to become high school and university teachers and artists who would go on to influence the next generation. In this project, I would like to explore the transnational character behind the growth of modern sculpture throughout East Asia and make video-interviews and sculptures to document what I discover. In Taiwan, I plan to focus my research on “黄土水、陳在癸、黄清呈、范徳煥、張昆鱗” and the people they influenced.