Su-Chen Hung | Three installations at Intersection for the Arts

1. Ants in the City – A video installation
Media: 6 HD video projectors, computers and sound system
Dimensions: Variable
Ants in the City, a video installation, likens ants to urbanites. In staggered 12-minute loops played to a soundtrack of city sounds, swarming ants consume a path of syrup. Shot with a macro lens, projected at 64x larger than life, these ants’ cooperative and bullying interactions are unmistakable, as their transparent stomachs turn red with syrup.
When people view the video installation they become part of it as the digital projection of red honey and crawling ants floods their clothes and bodies.

Five monitors are lined up horizontally along the wall. Monitors 1 to 5 each play back consecutive hours of the progression made by some San Franciscan ants in consuming a luscious red mouth-shaped splotch of honey-sweet syrup. Four and-a-half hours later they had licked it clean as a whistle. 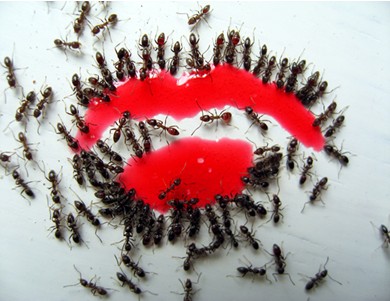 396 bobbins of red sewing thread are lined up on the floor along two walls, meeting up with the base of the spiral staircase.

From each bobbin, a single thread has been drawn out; these fine threads meet as one strand at the upper corner of the ceiling.

連結:
Ants in the City (BCS)
You are using an outdated browser
For a better experience using this site, please upgrade to a modern web browser.