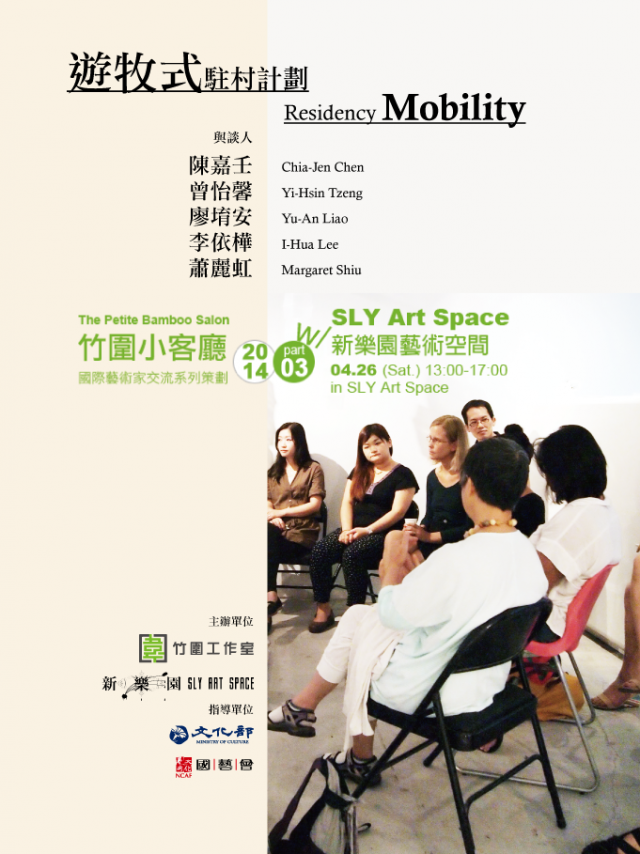 Summery
Project based Artist-in-Residency programs are different from Classic Residencies, which are most familiar to artists. These projects breakaway from the traditional manner that AIR programs only happened inside a residency.  Project based AIR programs allow artists to jump outside barriers. It allows artists to work and experience different disciplines and cultures.  Artists can work in different regions and time frames as they see fit. It provides freedom and enable interactions between nations. In the April “Petite Bamboo Salon”, our artists will share their inside stories about these residency programs; how these programs are formed and the affections on their lives and works.

Introducing the Panelists
Chia-Jen Chen
Born 1976 in Yunlin, Taiwan and graduated from National Taiwan University of Arts, M.F.A., he also taught at the College of Fine Art in NTUA, and attended the doctoral program of Arts & Technologies de l’image , universite Paris 8. He currently works and lives in Taipei, specializing in contemporary photography. His works have been exhibited in Liverpool Biennial (City States) 2012, and also Paris, Lyon, Rome, Budapest, etc. His work reveals the situation in which contemporary urban dwellers may face by directly photographing or digital processing.

Yi-Hsin Tzeng
Born and raised in Taipei, Taiwan, Yi-Hsin Tzeng received her MFA from Savannah College of Art and Design with an artistic honors full tuition fellowship in the painting program. Her work has been exhibited in Taiwan, USA, Colombia, Australia and France. She was also the recipient of several artist residencies, including Watermill Center run by Robert Wilson, Vermont Studio Center, the Elizabeth Foundation workspace in NYC, Ox-Bow in Chicago, Atlanta Contemporary Art Center and AIR program supported by Asia New Zealand Foundation. Ms. Tzeng continues to investigate the shape and the color of human desire using various mediums, including painting, video, installation and sculpture. Recently, her works were featured in the latest New American Paintings magazine, Scope Art Fair in Miami and New York.

Yu-An Liao
Born in Taipei in 1979, Yu-An Liao graduated from Graduate Institute of Plastic Arts in Tainan National University of the Arts. His work is based on his self-image and mental status; it’s a series of portraits of modern urban people and their lives. The characters in his painting are filled with strong “weariness.” Times and again, they feebly try to contact and communicate, which has become a difficult action. The “weariness” seems to be a shared experience that concentrates the contradicted and alienated emotions, quietly radiating. Each canvas is like a stage with the edge of the curtains. People walk on and off the stage, appearing and disappearing abruptly even when the spotlight is still on. The paintings are like accidental theaters, and the characters are actors and actresses still in rehearsal.

I-Hua Lee
I-Hua Lee is a visual artist from Taiwan. She has engaged body issues, gender roles and performativity in an interdisciplinary art practice. Her work seeks to transgress fixed boundaries of power in society. This involves creating theatrical stages, in which include human body casts, arranged feminine dresses, cross-dressed costumes, exaggerated backdrops, bodily expressions and performances.
Lee has exhibited her works in such venues as the Taipei Cultural Center in New York, the Newspace Center for Photography in Portland, and the Woman Made Gallery in Chicago and has participated in numerous exhibitions in Taipei, Shanghai and the United States. Lee has been a finalist in Flora & Fauna Photography Competition in 2009. Her first artist book Short Conversation was published in the same year in Taiwan. She was a project manager at artist Cai Guo-Qiang's studio and is the founder and chief editor for an independent curatorial journal Chuan Art that was launched in August 2011.